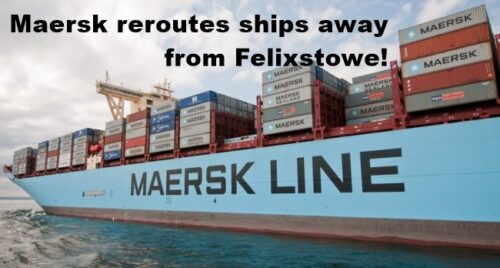 Felixstowe – Maersk, the world’s largest container shipping company, is diverting big vessels away from the UK because the nation’s main port is rammed full of containers.

The Danish group has started to reroute huge ships away from Felixstowe, which handles 36 per cent of the country’s containerised freight, instead discharging UK-bound cargo in Europe for smaller vessels to transport to the island nation.

Lars Mikael Jensen, head of global ocean network at Maersk, said the truck driver shortage meant it was taking longer in the UK, relative to other countries, to get fully loaded containers moved away from ports and to return the empty ones for pick-up.
“We had to stop operations on a ship because there was nowhere to discharge the containers. Felixstowe is among the top two or three worst-hit terminals [globally].

We are having to deviate some of the bigger ships away from Felixstowe and relay some of the smaller ships for the cargo,” he said. “We did it for a little while over the summer and now we’re starting to do it again.” The turmoil at the UK’s biggest container port comes as retailers stock goods ahead of the Christmas shopping season.

While saying that goods would be widely available at Christmas, Jensen warned that retailers may need to prioritize what they ship.

Congestion at ports has been widespread across the world since the end of last year when the pandemic wreaked havoc on supply chains by triggering volatile demand for goods, factory closures and restricted operations at ports.
As a result, shipping a container between China and Europe costs more than six times as much as a year ago. However, the situation at ports in the UK has been particularly severe because of its acute lorry driver shortage.

Felixstowe port said a shortage of drivers meant that it was taking about 10 days before cargo could be taken inland to be unloaded, up from the usual four-and-a-half days.
It said the “situation was improving”, adding that it now had the most space for inbound containers since the beginning of July. Last week the port imposed restrictions on receiving empty containers from Maersk and Evergreen but it has restarted accepting them.

“The pre-Christmas peak, combined with haulage shortages, congested inland terminals, poor vessel schedule reliability and the pandemic, has resulted in a build-up of containers at the port,” the port said. “Empty container levels remain high as import containers are returned and we are asking shipping lines to remove them as quickly as possible.”

John Manners-Bell, analyst at consultancy Transport Intelligence, said Maersk’s decision was “symptomatic” of the supply-chain issues across the world. “These changes in strategy by shipping lines are going to happen more and more often,” he added.
Some importers, such as Tesco, have diverted containers on to the rail freight network as a result of the driver shortage. Air cargo volumes are also being pushed higher by the lack of capacity at ports.

Alex Veitch, deputy director of public policy at Logistics UK, which represents the freight industry, warned that the congested ports could become a “serious issue for UK supply chains”. “Businesses are working tirelessly, around the clock to find alternative routes to bring goods to the UK while the situation at Felixstowe eases.”